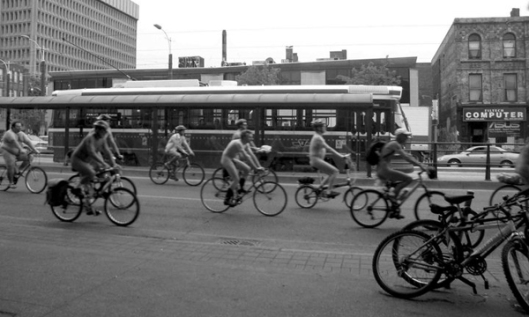 Bike shorts don’t leave much to the imagination, but this picture is proof that they’re better than nothing!

As part of Saturday’s eighth annual World Naked Bike Ride (WNBR), over 100 Toronto cyclists stripped down and streaked through the city in protest against global oil dependency and the harm automobile pollution poses to cyclists, pedestrians and the environment. And they weren’t alone. The ride took place worldwide, with naked cyclists cruising through 70 cities in 20 countries.

I admit, I didn’t catch this year’s ride live. This photo is from 2010, when I’d just stepped out of a Kensington Market shop and was standing on Spadina, conveniently with my camera in hand. Suddenly, these naked cyclists rode by…and of course I couldn’t resist taking a peek, er, I mean pic.

This year’s 14 km ride started in scenic Coronation Park, by the lake, and did a loop, hitting major downtown landmarks, including city hall and Kensington. Cyclists were invited to gather together at noon to decorate their bikes and their bodies (body painting is a fun way to be a tad demure). At 1 p.m., riders of all shapes and sizes took off on what I imagine was a liberating albeit uncomfortable ride – for both the cyclists and onlookers!

I mean, really, how painful is it to ride a bike in the buff?

Apparently, not so painful that Toronto riders were doing so back in 1912, when this photo was taken of naked cyclists riding along the Don River (the original picture is from Toronto City Archives). As this year’s WNBR Toronto poster indicates, Toronto cyclists have been riding naked for a hundred years! Who knew? 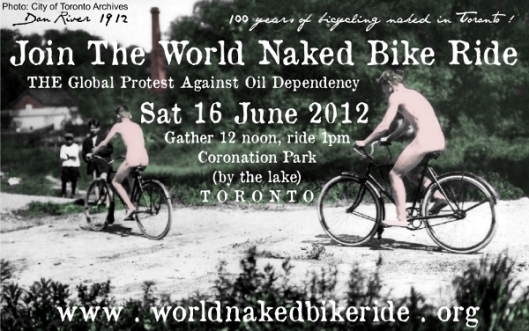 But unlike the gentlemen in the poster, ride participants are asked to wear shoes and a helmet. They’re being models of safe cycling, after all. That, I think, is what’s so amusing about the sight: they’re au naturel but wearing gear!

So I ring my bell in solidarity. This city needs all the good cycling news it can get, what with our mayor, Rob Ford, wanting to remove bike lanes. While I’m fine riding with traffic (heck, I am traffic), I do appreciate bike lanes and would rather not inhale car exhaust while riding.

Info is already available for next year’s WNBR Toronto. If you’re keen on participating or you’re curious about the possibilities, visit the group’s Wiki page for deets on the June 15, 2013, event.

And remember, sunscreen is a must when all you’re wearing is shoes, socks and a helmet. Talk about cheeky! 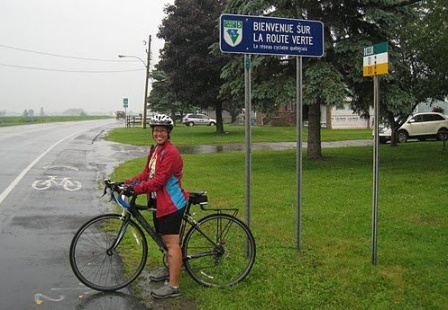