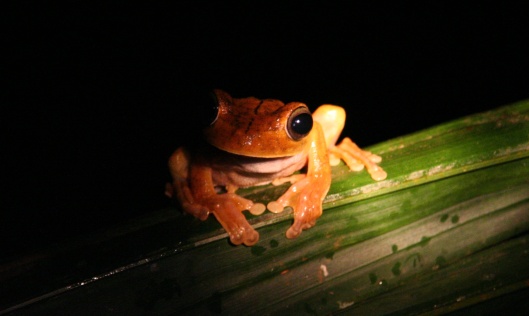 January being an ideal time to visit Costa Rica, I’ve decided to do a few posts about my trip there last winter, when I spent about a month wandering the jungles and beaches. I started out in Bahía Drake, on the Peninsula de Osa, in the south. The area is rather undeveloped, with no bridges for vehicles to cross the rivers – you just drive right through the water and hope you don’t get stuck (four-wheel drive is a must). In fact, there aren’t even any real bridges for pedestrians, who cross the rivers on makeshift bridges, like fallen logs. It really is a jungle out there, the only “bridges” being in the treetops so the monkeys don’t have to cross the gravel road!

I stayed at the remote Pirate Cove, a tiny rustic resort in the jungle, in my own private bungalow overlooking both the Pacific Ocean and the Rio Drake. And though I’m not one for creepy crawlies, I bucked it up and did a night tour around the grounds, with just myself and my guide, Gustavo, a lovely gentleman from the nearby village of Agujitas. It wasn’t like the regular tours you get in the more touristed areas of Costa Rica, where a slew of guides line up to poke sticks in a tarantula nest. We really were just exploring the resort grounds and walking along the road to Agujitas, with Gustavo’s hearing being so in tune with his surroundings that he could figure out what leaf an insect was under based on the sound the bug was making.

Mucking about the mangrove, I came face to face with a caiman, which is basically a small croc, but it didn’t seem so small when I was knee deep in water, staring into its glowing beady eyes in the dark! The frogs we discovered were much more to my liking, at least until the one pictured here jumped onto my arm and I screamed, making Gustavo shush me for fear that someone in the distance would think he was attacking me. It would have been funny if I hadn’t been so scared of all the animals! Waiting to be accosted by a boa constrictor is not my idea of fun…but it turned out to be pretty cool (you’ll have to wait for another post for the boa pics!). Here’s one of the frogs from the mangrove. I was switching between my DSLR and point-and-shoot and took pictures of a few frogs, but I’m 99% sure all of these pics are of the same one, the famous and colourful red-eyed tree frog. Gustavo had gently placed it on his shirt so I could take some pics (the colour contrast was stronger that way), then he let it step back onto a leaf, and eventually it changed colour to camouflage itself. You can also see that it inflated itself to appear bigger and its eyes darkened too. 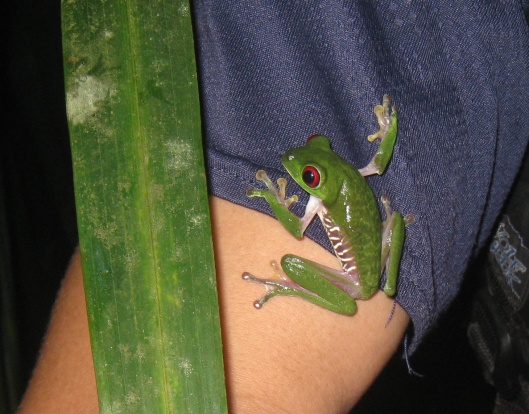 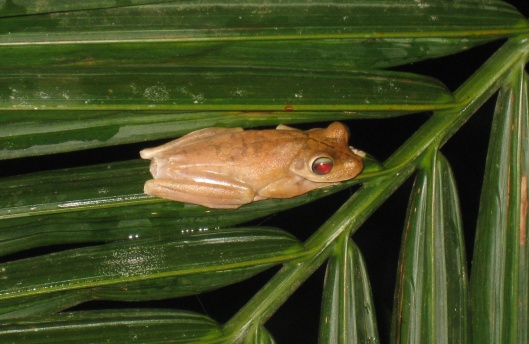 2 thoughts on “this isn’t kermit”