Volunteers gather in the Amsterdam parking lot for a brief training session as the Open Roof Festival prepares to kick-start Summer 2012.

Ahhh, summer in Toronto has arrived! And the heatwave of the past few days has finally subsided. Too bad the thunderstorms that brought tonight’s cooler climes (yes, these days 26°C is cool!) also brought the Open Roof Festival indoors – that is, not so open and def not outdoors.

And we all know how much I love outdoor cinemas: in green spaces (TIFF in the Park), on water (the way cool Sail-In Cinema)…even in a parking lot (read on)!

But thanks to tonight’s looming deluge, Open Roof Festival organizers announced at 6 p.m. this evening that the opening-night outdoor screening ($15 per ticket; see schedule below) would be moved indoors. Conveniently, the building beside the lot houses a 250-person industrial event space, complete with a permanent screen, a wee stage and washrooms…. In. A. Brewery. 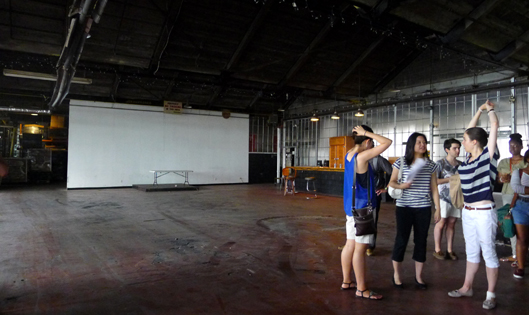 Open Roof screens films rain or shine. If there’s a high chance of showers, the fest moves into the Amsterdam Brewing Company’s event space, which has a permanent screen, washrooms and a 250-person capacity.

But this empty parking lot, a sunken space ringed with grass and covered with gravel, is transformed as night falls and festival goers pour in, under the stars, with the CN Tower and illuminated downtown skyscrapers creating a beautiful backdrop.

(The area does, in fact, get quite cool at night, since it’s a couple of blocks from the lake, so sweaters, jackets and the like are a must.)

Cooler still are the Canadian indie bands opening each of the summer-long festival’s 10 films (check out the list of both below). That’s right! Ticket holders enter at 7:30 p.m., just in time to catch the band at 8 p.m. as they perform on the ground right in front of the screen. How music-fest authentic, with bands within arm’s reach!

And what’s a music (and film) fest without cold beer and flavourful food? (I’m thinking about my beloved Hillside and its support of local food vendors varying from vegetarian to ethnic to meat lover to baked goods to organic ice cream!) 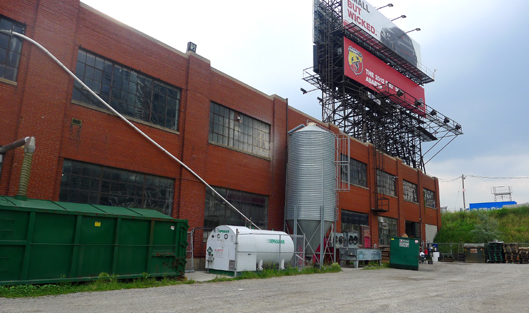 Given that Open Roof takes place on Amsterdam Brewing Company property, beer from Toronto’s first craft brewery abounds. Be aware that you must purchase drink tickets and can only consume alcohol bought on the microbrewery’s lot. As the brewery store will be open till 11 p.m., beer can be bought at the shop, but it cannot be brought onto the festival grounds, since no outside beverages or food are allowed. Absolutely no glass containers, either.

Pair your drinks (nonalcoholic beverages will be available, too) with the featured local food vendor suited to that movie’s theme. Hungry patrons at this week’s film, Marley, about Jamaican musician Bob Marley, were treated to Jamaican food. Yum!

And what really gets me excited about the fest is that Cycle Toronto (formerly known as the Toronto Cyclists Union) is offering free bike valet parking on site! Majorly handy, since there’s little bike parking at the brewery. Plus, it encourages cycling to the event. Heart.

Now, if you’re spending summer in the city, doesn’t the Open Roof Festival sound like a fun Thursday night out in Toronto? Live music, indie films, beer, food and bikes! I’m so there. Really. I’m a volunteer! 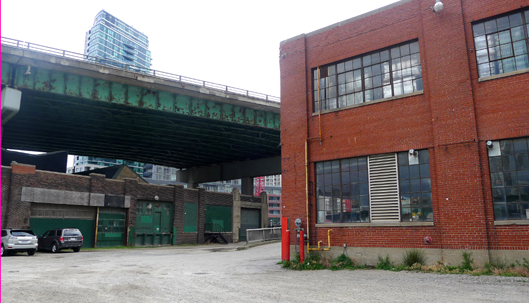 Bad: the Open Roof Festival is beside the Gardiner. Good: the accessible ramp up to the Amsterdam’s washrooms is on the left side of the brewery.

What: Open Roof Festival, a music and fest celebrating bands and films.
When: Thursdays all summer long (June 21 to Aug. 23, 2012). Doors open at 7:30 p.m.; the band plays at 8 p.m. and the film screens at 9 p.m.
Cost: $15 per film. See TIP below about purchasing tickets.
Where: The Amsterdam Brewing Company parking lot. It’s a tad out of the way at 21 Bathurst Street, but still accessible by streetcar, bike and foot. The parking lot, BTW, won’t be used as a parking lot, so bike, walk or TTC it.
Bonus: There’s a free valet bike parking! Thanks, Cycle Toronto!
TIP: Don’t fret if tickets sell out in advance. Organizers limit preshow sales in case the film screens indoors, but they’ll still release tickets the day of.